GILDING THE LILY ~ Redefining a moment in time February 16 2017

At the start of the millennium I was living and painting in Paris. It was my dream city for inspiration with its rich history steeped in the 1920s. Like the artists that had gone before me I was hungry to paint, and at times I couldn’t imagine myself ever leaving the magical City of Lights.﻿

However, it wasn’t long before a gallery in California discovered my Art Deco influenced paintings, and our collaboration strengthened over the next twelve months. As my work began selling, it became apparent it was important that I relocate to the Golden State.
Living as an artist in California is not as glamorous as it sounds and money was often tight. I was sharing a tiny one bedroom apartment with barely enough room to move, my easel set up in a tight corner, but I was happy. I was consistently producing painting after painting and California’s bleached Art Deco environs gave me all the inspiration I needed.

One painting in particular stands out from that time.

I’d had the vision to create this painting since Paris. And when the moment of inspiration struck I simply had to act. On that particular day, I had enough money to buy the stretcher bars, but not enough for the canvas on which to paint.

Like many artists before me, I had to improvise. Some, when compelled by the bolt-strike-urgency of inspiration have used cardboard, wooden boxes, or even the very walls of their abode. In my case, a scrap of black cotton fabric was sourced, and sitting at the easel I breathed life into one of my most admired pieces: Cubist Lilies. 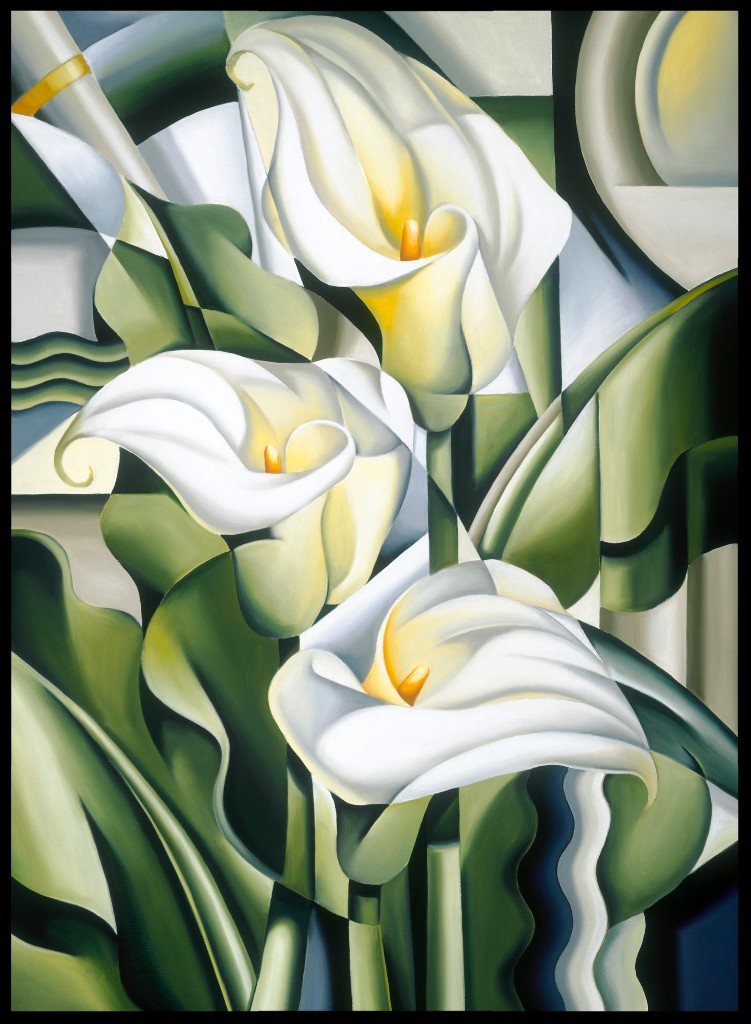 Six months later, I moved back to Australia. The painting, rolled up in my suitcase, came with me.

Across the 14 years since it was painted, the infamous black cotton has proved an unstable surface for the oils, and the painting, rolled up and relocated across oceans, cities and time zones has cracked and is damaged beyond repair.

Rediscovering this piece again recently, I was struck with a sense of loss… So much of being an artist is the deep satisfaction you feel, knowing your work is being appreciated by others, yet this original was never afforded that opportunity. I felt that something should be done, and immediately I experienced that same sense of urgency I’d had all those years ago; the urge to breathe life into my Cubist Lilies once again.

GILDING THE LILY  ﻿is now complete. The new work is a rich reworking of the original. The lily - a classic Art Deco motif - is revived and refined. A clarified palette offers a new depth, and sensuality to the piece. The composition is more succinct, with greater definition in the detail and complex tonal graduation. The lilies are rejuvenated and more finely rendered, with warmer tones, luscious deep greens in the leaves, delicate silvers and luminous yellow in the sensuous blooms. This affords the piece all the elegance of the Art Deco era, with smooth surfaces and sleek lines, it exudes the balance, opulence and grace of this timeless age. This confident reworking of my original composition pays homage to a time in history that has greatly inspired me throughout my career. It reflects the reverence I hold for this era, and my evolution as an artist.